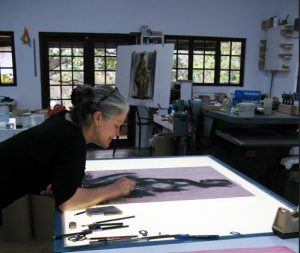 In her iconography she draws from a range of cultures (including African, Chinese, Egyptian, Greek, early Christian and European) and a range of philosophies (especially the Buddhist preoccupation with stillness and the shedding of attachment and the ego) and psychologies (more Jung than Freud) – but her work digs deeper, arriving finally out of an internal and personal place that Bell occupies in the world as an artist, a woman and an explorer. A central task is to make the unknown present – apprehended in a series of powerful images that are both of her and beyond her. Her earlier figures, characterised by entrapment (in the country, in the body), have given away to figures embodying the seeker – often accompanied by boats, horses, chariots. Images of lions, dogs, horses and angels recur. These are often intermediary figures between the physical world and a higher more spiritual realm. They are also aspects of herself – the powerful daemons that reside in all of us, which are often accompanied by solitary female figures, some full of assertive confidence, others more vulnerable and less sure of their agency. Bell is interested in the half-formed image – the unwritten, as yet unformed spaces we move towards in our quest for self-knowledge. More recent work has also become more concerned with surrender – to the higher self, the mystery of the universe, the simplicity of the present. All her art, she has stated, works towards the Zen mark: the single gesture of absolute presence. Her quest is ongoing – and has left in its wake a series of hugely powerful, totemic images from what Yeats called Spiritus Mundi.