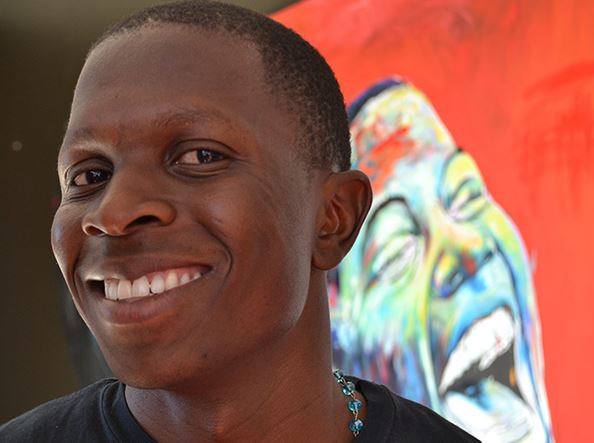 Nelson Makamo is a Johannesburg based artist. He was born in 1982, in a town called Modimolle, in South Africa’s Limpopo province. Born with an astounding artistic aptitude he honed his craft at Artist Proof Studios in Johannesburg where he studied print making for 3 years.

Nelson’s work is strongly influenced by the candid innocents of children. He is particularly drawn to children in rural South Africa, he believes that they embody the peace and harmony we all strive for in life, the search for eternal joy lies in the child within us all, we are just so consumed with worldly things that we forget the simplicity of life through a child’s perspective. He evolved his scope of experience so did his medium of expression, namely charcoal, acrylic, water colours, mono-types, silk screen and oil paintings He refrains from planning his pieces and opts rather, for the canvas and days inspiration to lead him. His travels have allowed him the opportunity to exhibit in various locations around the world. UTS gallery in Edingburgh Scotland, Somma Lombardo business and art exhibition, Italy Leiden in the Netherlands and Everard read in Johannesburg.

Nelson currently works as a full time artist from his studio in the heart of the city of joburg. A space he deems to be the most sacred place in the world.

Before Sunset by Nelson Makamo

How cool can I be by Nelson Makamo